The ice on the pond closed in December this year. Just before it closed the migrating ducks moved through: small groups of Hooded Mergansers, American Mergansers, Buffleheads and Goldeneyes. These ducks joined the loons who remain on the pond until the ice closes in. They stuff themselves with fish, mussels, snails, crayfish and frogs. The mergansers will sit on the surface bobbing on the waves until ready to fish. When fishing they swim with just their heads submerged looking for prey. When they spot a likely fish they dive rapidly, catching it in their serrated bill. If you watch carefully, as they surface, you will notice they flip the fish up in the air and swallow it head first so that the spines on their fins do not catch in the throat. After they fatten up in the pond, and the ice chases them away, they travel down to the coast for the winter, feeding in the ocean. In spring they will return once again on their way to Canada to breed. Only the Hooded Merganser and the Loon remain to breed on the pond.

When the pond froze solid we had a couple of weeks of good skating. At night the ice expands as it freezes. The ice seems to sing and groan from the stress. Sometimes the ice cracks beneath as you skate along. A starry night with the moon shining and the ice singing is an unbeatable experience. We had a few nights where we saw the Northern Lights but they were not as spectacular as last winter. The ice boats made it out a couple of times and achieved some remarkable speeds.

This winter the ice fisherman were busy. Five ice shacks were erected for protection from the bitter cold north winds that cross the frozen snow. Many fisherman did not have a shack and just wore their warmest clothes. The prize for their efforts included many large pickerel, bass and perch, as well as the privilege of being outside in a beautiful spot.

Wendell Nason spotted a deer carcass on the ice just before it broke up. Over the next few days he spotted many crows visiting the site. A Bald Eagle made several visits to feed on the meat, as well as a coyote. Once the ice opened up muskrats could be seen diving for mussels which they would bring up onto the ice and eat.

In the winter of 2003-2004 a Mr. Tufts came at the behest of some of our neighbors and trapped 5 beaver off of the marsh on my property. The beaver are trapped underwater and drown. When we protested, the game officer pointed out that Mr. Tufts needed no permission to trap if he could access the beaver lodge from the frozen pond. This last summer, after intensive trapping all winter, we noticed three large beaver swimming about, no young, however. My reading tells me that trapping does not decrease the beaver population. If all the beaver are removed, new ones move in; if not all beaver are removed, they reproduce at a higher rate due to less competition for food. I know that Beaver cause much destruction as they have cut down a number of my crabapple trees. Four-foot-high turkey fencing firmly staked provides the best protection. Two years ago they tore off and reached over three-foot-high chicken wire to neatly cut down my young trees.

April 8, before the ice and snow were gone, the Wood Frogs started announcing their mating season. By April 22nd egg masses were spotted in the marsh. Spring Peepers started singing the next week and then the Leopard Frogs the following week. Early May the Common Toad began its chorus and the Green Frog was heard first May 20th. When the Bull Frogs begin singing in June we know that warm weather is upon us. On warm and rainy spring nights the amphibians move about. Large numbers of frogs and toads can be seen crossing the roads around the pond. May 21st my son went out with his flashlight and found a half dozen Yellow Spotted Salamanders crossing Garfield Road. Twice that many had been killed by cars. Black with yellow polka dots and up to 9 inches in length, they were spectacular to see. I know of one community in Massachusetts that values its salamanders so highly that it built a tunnel under the road to allow safe passage. 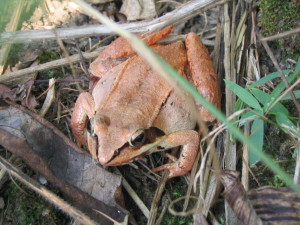 The first to be heard in the spring, a Wood Frog.

In early April we were flooded out with 5 inches of rain over a couple of days that melted off the winter’s accumulated snow. People who have lived here longer than myself tell me the pond was at its highest in 20 years. We had a few days where we had to canoe down the driveway to get home. The level rapidly dropped and we were grateful that we did not have to ferry the groceries in the canoe. The beavers swam all around the house. One morning on my way to work the beaver kept slapping his tail at me as I waded down the driveway to my parked car. The beaver seemed to be telling me that this was beaver, not human, territory.